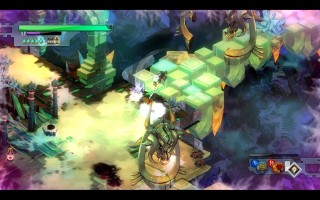 from a place called Steam during a thing called the Great Gift Pile.  He played for a bit to help some folks out but then put it on the back burner.  You see like most other games Bastion has a twist or two.  A narrator explains what’s happening as the kid in the game tries to set things straight.  The kid has to rebuild his city by collecting parts from the places that survived, sometimes taking it from the critters that had wanted the power for themselves.  The game mixed adventure and role playing elements in a colorful water colored world.  The guy liked the game and wanted to make sure he had time to play it right.

After a spell the guy came back to the game.  He found that the kid had several weapons and abilities to choose from.

Some of the weapons made the narrator in the game spout off different phrases.  I always liked that narrator.  The guy decided his favorite weapon in the game was the kid’s best friend.  The kid also used a powerful lure to call a few squirts out.  These squirts helped the kid though, they weren’t like the angry squirts that inhabit the land.  Add to this a mighty carbine that the Calamity didn’t get and eventually the kid found enough shards left to build himself a distillery.  The game then gave the guy some good advice, advice that he took to heart.

As I said the guy had worked up a mighty thirst trying to help the kid out of his jam.  The guy went to the kitchen and poked around a bit.  You never know what treasures you might find if you search everywhere.  The guy was hoping to brew up a concoction, one that would keep him hydrated long enough to rebuild the Bastion and set things straight.  After he rustled up enough ingredients he worked on his drink of choice: a Stone Fence.

The kid gathered up After he organized his haul the guy used a really sharp knife to cut up some chunks of the fruits.  He threw the chunks in the metal mixing cup along with the sugar.  He really wished he had a sugar cube but the wilds…they don’t always give you what you want.  He put the bourbon in, then took out his best friend.  He raged around in that cup for a while, letting his best friend muddle the fruit, the bourbon and the sugar thoroughly.   He threw some ice in there to get everything nice and cool.  He strained the mixture into a glass filled with ice then poured the hard cider over the top.  Wait!  The guy wasn’t done yet…he took that old sharp knife and cut up an apple wedge then used it to garnish his glass.  Now the drink was ready.

The guy finished up Bastion and helped the kid out.  No one knows what happened to the guy after this, but I’d like to think he is still out there playing games and mixing drinks.  You never know when you might need a guy to step up and take care of things again.